From Sunshine Wiki
< Development
Jump to navigation Jump to search

A list of all prerelease material pertaining to any builds of Super Mario Sunshine that have yet to be properly identified.

An early clay model of Isle Delfino was created before development started likely to give designers a good idea of what the island was supposed to look like. It seems to be similar to spaceworld at first glance, but there are many more buildings present here than in the version showcased at Spaceworld.

There are little white pieces of paper resting on the model, which may have been early markers for station/harbor locations as referenced by unused text leftover in the final game. There also seem to be locations present here that were cut form the final release, which again, were likely the stages referenced in the retail game. Interestingly enough, the middle town at the top of the model seems to have an area for it leftover in the distance when viewed from Pianta Village.

Seen in only one screenshot leftover in the game's files, which ended up being used for texture mapping on Eely-mouth's eyes oddly enough. Mario is seen standing on the girders above the harbor, looking out towards Dolpic Town. F.L.U.D.D. is using the skinny Spaceworld design, the harbor consists of large concrete docks, and the bloopers have a very early look to them. Furthermore, the sky is using the old "duck cloud" textures, unused watercraft is visible, such as a cruise ship and a black submarine, and the Spaceworld airport can be seen in the distance.

It's unclear whether or not this is the same build used for the spaceworld trailer. Dolpic Town itself matches one for one, but Ricco Harbor has a different style to it, and the life/water meter and sol coin counter are conspicuously absent. Given the fact that Dolpic Town matches the Spaceworld version and not the unused height map, and that the HUD appears to not exist, it might place this build before Spaceworld, and thus, be the earliest known piece of in-game Super Mario Sunshine content that exists. 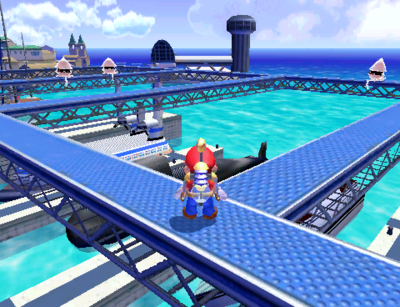 At a 2002 Nintendo press event, early footage of Super Mario Sunshine was reportedly shown, however, Nintendo didn't allow cameras into the conference for recording or photos. One individual who was at the event quickly sketched out things he remembered from the video, including Yoshi as an NPC Mario could speak to, instead of a partner that Mario could ride. These sketches also seem to depict an early version of Petey Piranha, who is missing his head petals and is rooted in the ground, instead of having two stubby legs.

These pictures clearly depict the E3 health meter, as well as the Spaceworld era design for F.L.U.D.D's nozzle, seemingly placing this version of the game close to, if not the same build as, February 2002. However, one would be keen to point out that Bianco Hills at the left appears to have a neat row of power lines running through it, and the plaza image in the center has a deciduous tree similar to Dolpic Town, rather than palm trees seen in the final game. Both of these elements only appeared in the Spaceworld build of the game, let alone 'any' pictures of the plaza at all, which were completely absent in February 2002. Providing these sketches are accurate, this might indicate a unique time frame of the game's development, just as Nintendo was beginning to shift gears with the overall direction of the game's style.